Doing a take home exam at the moment and its painful!

thankfully I never have to look at quantum field theory again after this.
Posted by Ellemay at 2:16 PM No comments:

I just read about a need David Lebovitz has to collect jars. You can read about it here. Reading it made my heart sing with joy as there is someone else out there who like to reuse jars as much as I do.

Growing up there were always spare empty jars in the pantry. They were either for shaking up gravy bases or for drinking out of. Since moving out however, my collection seems to have dwindled due to C insisting that I throw empty jars out. Hence anytime my need to jam has arisen, it has failed due to not having enough jars to store the products in. This year however I'm thinking of starting my collection earlier in the year so I can start jamming in spring.

Yes, you're all getting homemade ham for christmas this year!
Posted by Ellemay at 8:39 AM No comments:

I seem to be getting the hang of the whole low gi thing very slowly. It seems that the essence is no more white flour or highly processed foods and more whole grains, fruit, veg and protein. I think if I can stick to the recommendation of 1/4 carbs, 1/4 protein and 1/2 veg I should be fine. Or was it 30/30/40?

Either way, less refined carbs and more fruit and veg.

Tonight's dinner is pumpernickel with low fat cream cheese and turkey breast. Nutritious.
Posted by Ellemay at 6:07 PM No comments:

best and simplest dish ever

I found out just over a week ago that I have PCOS, polycystic ovarian syndrome. To me it's rather depressing as it means that I'm going to struggle losing weight and its confirmation that I really am overweight and have health issues. The good part is that I have a blood test to prove the I'm not diabetic or likely to become so anytime soon and PCOS is treatable, but not curable.

One of the first things I need to do is lose some weight (already doing) and start switching to a low gi diet. I prefer things like brown rice and bread anyway so its not going to be that hard except when we combine it with a fructose intolerant partner, meals are going to become tricky.


First things first though, I am now armed with books and I'm not afraid to read them.
I was thinking that my first steps are no more white bread and I need to cut down on the pasta unless its with a very healthy sauce. I think this may involve cleaning out my freezer....
Posted by Ellemay at 10:51 AM No comments:

I've also joined the aus_cookie_swap on livejournal and will be making that batch of bikkies tomorrow. I'm thinking my fool proof choc chip but I'm not keen to part with it. Maybe some oatmeal choc chip...
Posted by Ellemay at 6:55 PM No comments:

Turns out that I haven't uploaded all my cakes into the one spot yet. I realised this whilst talking to a dear friend in the UK and he said that he has never seen my cakes.

This is for you Smittens! 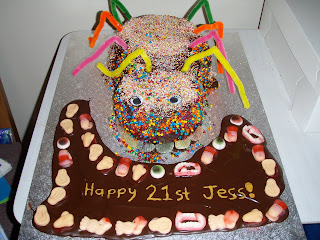 We start with a gluten free chocolate raspberry mud cake for a halloween themed 21st. The birthday girl was told that if she didn't pick her own cake then I would decide and she would end up with a hot pink spider. She loved the idea. So instead of hot pink, she got a sprinkle-back spider. Everything on that cake is edible and gf except the legs and eyes. There is also a lime jelly center but that didn't work so well. It was meant to ooze when cut into but I think the cake soaked up most of it... here is another view 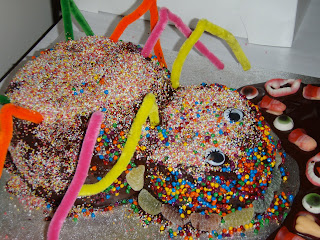 The next cake was due the same day for a wedding in Bendigo. It was at the China gardens and was also a chocolate raspberry mudcake. The only issue we had was that it was over 30C and the icing melted slightly. So the first shot is the nice one from before it left my house and the second one is the slightly melted version that arrived at the reception venue. They loved every bit of it. 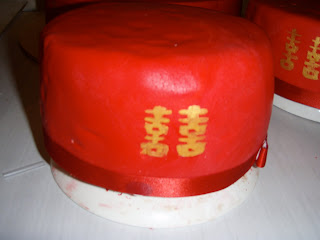 before the 90min car ride in stinking hot heat 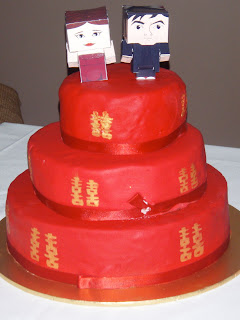 and afterwards
Next we have a cake that I did not bake. I only covered and delivered it. This fruit cake was for my housemates mother's 2nd marriage. The florist arrived after I delivered it to add the flowers. 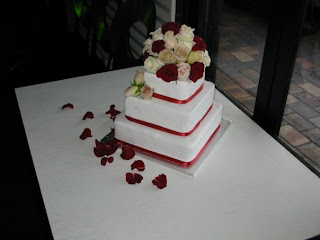 Cake number four I again did not bake, only iced and decorated. This was for friends I met at uni. Someone else did the bride and groom on top. I did the flowers and butterflies though. 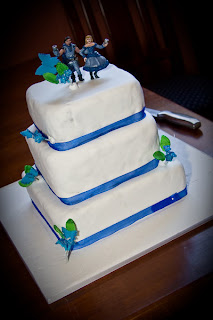 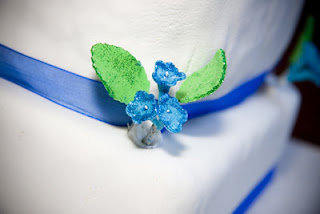 And now we come to the last cake. Please note that these 5 cakes all happened between Oct 31st 2009 and Feb 27th 2010.
The last cake was for another friends 21st. It was a chocolate cinnamon swirl with chocolate ganache. The cake and icing are both fructose free, some of the decorations aren't. She requested a purple sparkly chocolate dragon that wasn't too rich and fructose friendly. 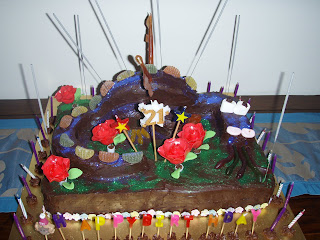 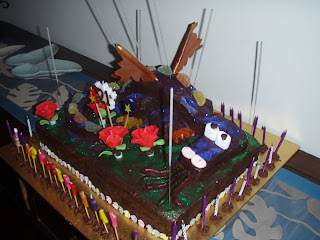 The small purple candles on the sides were the best $2 I have ever spent. Magic candles are entertaining for all!
Posted by Ellemay at 6:20 PM No comments: