So I came across this thing today called the Dark Days Challenge.  It's all about eating locally and sustainably at least once a week during the winter months and I thought what a great idea.

The only issue I have is that I live in the city and there isn't much near me in the way of farmland so my spin will be to make a meal each week that comes out of both my Aussie farmers direct box and something I find at the farmers market. If I can find something from the supermarket that also fits the bill then why not but ideally it won't.

Tonight's meal just happens to fit that perfectly. I made beef rissoles with mashed potato. The only things that did not come out of my AFD box were the zuchinni and the cheese.

mix everything together in a bowl until well combined and it starts to resemble sausage mix. divide into 8 mounds and pan fry until cooked.

steam potatoes until tender. Add butter and crush with a fork/potatoe masher. Add milk and cheese and stir until the consistency you like.
Posted by Ellemay at 9:04 PM No comments:

The last week has been seriously awful. It started with my giving an appalling talk and then handing in an equally appalling essay and it got worse from there until Thursday.

On Thursday I was offered a job that I hadn't even applied for. Someone asked me to come and bake the cakes at their cafe. If it worked out then I would leave my science career behind and start working 3 days a week in a cafe as baker and general kitchen hand. It would mean quitting my current job and picking up some extra shifts during the semester in the first year labs at uni.

The pros are:
- no more evening shift work.
- I'd be doing something I enjoy
- All work is during the day
- Lots of extra skills being learnt

I am also scared silly about screwing up and not being as good as they think I am.

That being said I think I'm going to take it.
Posted by Ellemay at 6:09 PM No comments:

My tops are now starting to feel loose and the jeans are becoming more loose too. This means I will probably have to go shopping in a few weeks.
I hate clothes shopping. Nothing fits right.
Posted by Ellemay at 1:22 PM No comments:

Our hosts this month, Barbara of Barbara Bakes and Bunnee of Anna+Foodhave chosen a delicious Stacked Green Chile & Grilled Chicken Enchilada recipe in celebration of Cinco de Mayo! The recipe, featuring a homemade enchilada sauce was found onwww.finecooking.com and written by Robb Walsh.
So its that time again. It was incredibly tasty but it got demolished or in the freezer before I remembered to take a photo.... So here's the recipe.
Ingredients
1½ pounds Fresh Anaheim chiles (about eight 6 to 8 inch chiles) 24 ounces 678 grams - roast, peel, remove seeds, chop coarsely. Other green chiles (NOT bell peppers) could probably be substituted but be conscious of heat and size!)
7-8 ounces Tomatillos (about 4-5 medium)212 grams - peel, remove stems
4 cups Chicken broth (32 ounces/920 grams)
1 clove Garlic, minced
2 teaspoons yellow onion, minced
1 teaspoon dried oregano
½ tsp Kosher salt (add more to taste)
¼ tsp Black Pepper (add more to taste)
2 tablespoons Cornstarch (dissolve in 2 tablespoons water, for thickening)
Hot sauce, your favorite, optional
2 Boneless chicken breasts (you can also use bone-in chicken breasts or thighs)
3 tablespoons Olive oil or other neutral vegetable oil (use more as needed)
Kosher salt and pepper
12 Small Corn tortillas (5-6 inch/13-15 cm). (you can also use wheat tortillas or other wraps)
6 ounces grated Monterey Jack, 170 grams (other cheeses (cheddar, pepper jack, Mexican cheeses) can be used. Just be sure they melt well and complement the filling)
Cilantro for garnish, chopped and sprinkled optional
Directions:
Roasting Fresh Chiles
1. Coat each chile with a little vegetable oil. If you are doing only a couple chiles, using the gas stove works. For larger batches (as in this recipe), grilling or broiling is faster.
2. Lay the oiled chiles on the grill or baking sheet (line pan with foil for simpler clean-up). Place the grill or broil close to the element, turning the chiles so they char evenly. They should be black and blistered.
3. As they are completely charred (they will probably not all be done at once), remove them to a bowl and cover with plastic, or close up in a paper bag. Let them rest until they are cool.
4. Pull on the stem and the seed core MAY pop out (it rarely does for me). Open the chile and remove the seeds. Turn the chile skin side up and with a paring knife, scrape away the skin. Sometimes it just pulls right off, sometimes you really have to scrape it.
5. DO NOT RINSE!
Green Chile Sauce
1. Put a medium saucepan of water on to boil and remove the papery outer skin from the tomatillos. Boil the tomatillos until soft, 5 to 10 minutes. You can also grill the tomatillos until soft.
2. Drain and puree in a blender or food processor.
3. Return the tomatillos to the saucepan along with the chicken broth, chopped green chiles, minced onion, oregano, garlic, salt and pepper.
4. Bring to a boil over medium-high heat and then reduce the heat and simmer for 10 minutes.
5. Add the cornstarch/water mixture and stir well. Simmer, stirring occasionally, until the sauce is thickened and reduced to 4-5 cups, another 10-15 minutes.
6. Adjust seasonings and add hot sauce if you want a little more heat.
Stacked Green Chile and Grilled Chicken Enchiladas
1. Heat a gas grill to medium high or build a medium-hot charcoal Coat the chicken with olive oil and season well with salt and pepper. Preheat oven to 450 degrees.
2. Grill the chicken until just cooked through, 4-5 minutes a side for boneless chicken breasts.
3. Cool and then slice into thin strips or shred.
4. In a small skillet, heat 3 tablespoons oil over medium-high heat until very hot. Dip the edge of a tortilla into the oil to check – it should sizzle immediately.
5. Using tongs, put a tortilla into the pan and cook until soft and lightly brown on each side, about 15-20 seconds per side (at the most).
6. Drain on paper towels.
7. Add oil as needed and continue until all 12 tortillas are done.
8. In a baking dish large enough to hold four separate stacks of tortillas, ladle a thin layer of sauce.
9. Lay four tortillas in the dish and ladle another ½ cup (4 ounces/112 grams) of sauce over the tortillas.
10. Divide half the chicken among the first layer of tortillas, top with another ½ cup of sauce and 1/3 of the grated cheese.
11. Stack another four tortillas, top with the rest of the chicken, more sauce and another third of the cheese.
12. Finish with the third tortilla, topped with the remaining sauce and cheese.
13. Bake until the sauce has thickened and the cheese melted, about 20 minutes. Let rest for 5-10 minutes.
14. To serve, transfer each stack to a plate. Spoon any leftover sauce over the stacks and sprinkle with cilantro, if you wish. The stacks may also be cooked in individual gratin dishes.
Corn Tortillas (from Rick Bayless’s Mexican Kitchen)
Makes about 15
1 3/4 cups masa harina
1 cup plus 2 tablespoons hot water
Pour hot water over masa harina, cover and let sit 30 minutes. Add (additional) cool water 1 tablespoon at a time until the dough is soft but not sticky. Divide the dough into 15 balls and cover with plastic wrap.
Heat a large (two burner) ungreased griddle or two large skillets, one on medium-low and one on medium-high.
Put a ball of dough between two sheets of plastic. If you don’t have a tortilla press, press to a 5-6” circle using a heavy frying pan or bread board or other heavy, flat object. Put the tortilla into the cooler pan or cooler end of the griddle. The tortilla will probably stick, but within 15 seconds, if the temperature is correct, it will release. Flip it at that point onto the hotter skillet/griddle section. In 30-45 seconds, it should be dotted with brown underneath. Flip it over, still on the hot surface and brown another 30 seconds or so. A good tortilla will balloon up at this point. Remove from heat and let them rest while cooking the remaining tortillas. Use quickly.

Posted by Ellemay at 9:59 AM No comments:

So I need to write this down some where so it will actually get done.

The plan for before I head to work is this: stick all the data from December through excel and make sure its graphed and averaged so I can peak fit at work tonight. Ideally I'd like to have the stuff from feb done as well. This is so I can spend tomorrow on my other assignments.

Oh and there will be this months Daring Cooks post up in the next few days. Just bare with me!
Posted by Ellemay at 1:32 PM No comments:

I'm late with this one but better late then never right?!


I've never made steamed pudding before and the thought of having to use suet grossed me out. I don't know why it does. I have no issues with lard, butter or dripping but suet grossed me out. Be proud though, I actually went to the butcher and asked for it. They didn't have any though so I had to use the Suet pudding mix from the supermarket. I halved the recipe on the back of the box and then played around a little as I wanted banana pudding! 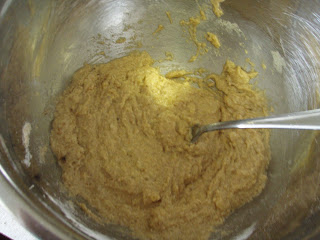 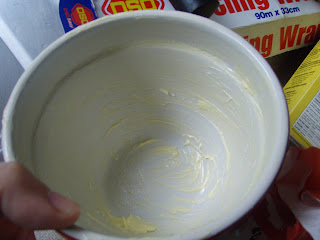 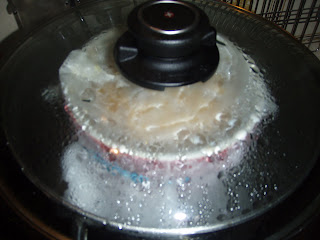 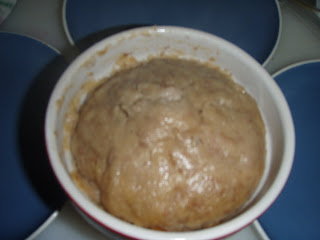 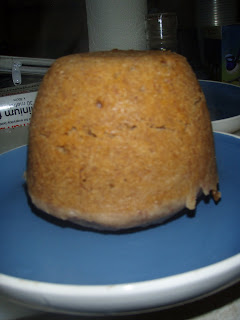